The Leupold GX-2 is a snazzier version of the GX-1. Visually, the only difference is its silver color. But the similarity ends there. For the GX-2, Leupold has added two useful features – True Golf Range™ (TGR™) and Club Selector.

The Leupold GX-2 succeeds the GX-II (introduced in 2008). Like the GX-1′s evolution from the GX-I, Prism Lock and Fog Mode are new additions from the earlier version. 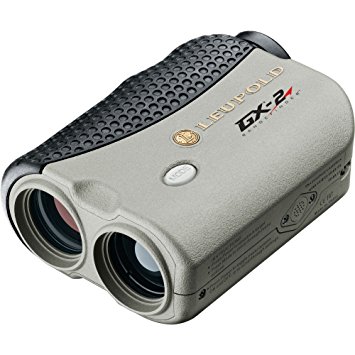 Light and compact, the GX-2 has a vertical orientation. Like all the range finders we’ve reviewed so far, it’s meant to be used with one hand. (We’ll get to the bigger models soon, we promise!)

Unlike the GX-1, the Leupold GX-2 is not tournament-legal, as the TGR™ and Club Selector functions go beyond measuring simple line-of-sight distances. So if you’re looking for a range finder for tournament play, consider the GX-1 or Callaway LR550.

What’s In The Box

Included with the Leupold GX-2 are:

The GX-2 boasts two features not found in the old GX-II – Fog Mode and Prism Lock.

For die-hards who doesn’t mind playing in less than ideal weather, the Leupold GX-2′s Fog Mode comes in handy. It screens out false readings from fog, drizzle and rain to maintain accuracy. Fog Mode is always on, but can be turned off in the Options menu.

If your favorite courses are equipped with prisms on the flagsticks, you’ll enjoy the Prism Lock feature. The Leupold GX-2 will sound a beep when it locks onto a prism as you’re scanning the course ahead. So that the readout won’t be lost if you scan past the pin, the display will freeze with the distance at which the prism was detected.

Like the GX-1 and other “one-hand” range finders, the Leupold GX-2 fits nicely in your pocket. The case is also fitted with a clip you can use to attach it to your golf bag.

The advertised maximum range of the Leupold GX-2 of 750 yards is lower than its competitors. But we think 1000+ yard ranging capability is just marketing hype anyway. It’s hard to imagine a real need measure that kind of distance on the course.

The GX-2 can capture the distance to the pin from up to 400 yards, as per the manual. Our experience shows the GX-2 performs consistently well to around 300 yards. Once you go beyond that, it’s likely to take a few tries before you get a reading you can feel confident in.

The 6x magnification of the GX-2 is squarely middle of the road in comparison to most other range finders. In our view, though, it’s more than adequate on the course.

The Leupold GX-2 has two features that distinguish it from the otherwise identical GX-1: True Golf Range™ (TGR™) and Club Selector.

Like the Bushnell Tour V2, the GX-2 takes into account the slope of the terrain between you and the green (or other target) to determine a more accurate distance for the next shot. With TGR, the Leupold GX-2 goes even further by factoring in altitude and air temperature. Both variables must be entered into the device manually. The GX-2 does not determine them on its own.

Closely tied to TGR is Leupold’s Club Selector, a nifty feature that recommends which iron to use based on the “true” distance determined by TGR. The Club Selector is not available unless TGR is turned on.

Club Selector should be calibrated by entering the average distance you hit with your 8, 6 and 4-irons. From those figures, the GX-2 determines your distances for the other irons using a special algorithm. Without information about your personal distances, Club Selector will use presets of 130 yards for an 8-iron, 150 for a 6-iron, and 170 yards for a 4-iron.

Like the GX-1, the Leupold GX-2 has the PinHunter feature that makes it easier to range the flagstick. Signals from more distant objects in the background are ignored in favor of (possibly weaker) signals from nearer objects. So, if there is a stand of trees behind the pin, the GX-2 will be able to distinguish the stick from them.

As with the GX-1, PinHunter is an “always on” feature of the GX-2. There is no need to switch back and forth between scanning and attempting to lock onto the pin, a convenience we very much appreciate.

The GX-2 is an excellent range finder that we wholeheartedly recommend. It’s as accurate as the GX-1, and we’re fans of Leupold’s Prism Lock and “always on” PinHunter features.

The TGR and Club Selector features add to its appeal for us, technology buffs that we are. While they make the Leupold GX-2 illegal for tournament play, they’re definitely nice to have. Plus, the GX-2 can be used during practice rounds to map out the course ahead of time and take some detailed notes.

Even with TGR, there are still some things you need to account for yourself. Wind speed and direction, humidity, and how the course is playing on a given day will all impact your game. Despite today’s technological advances, there is still much room in golf for good old human judgment.

As we pointed out in our Leupold GX-1 review, the yardage readout shows in the upper part of the display. Unfortunately, this occasionally causes some difficulty reading the yardage when there are dark objects in the background, such as trees.

We’d also like to see Leupold stand more firmly behind the GX-2 with a warranty longer than one year.

What Other Golfers Are Saying About The Leupold GX-2

The majority of Leupold GX-2 buyers are happy with their purchase. Amazon buyers give the GX-2 4 stars from a possible 5. Excerpts from buyer comments are paraphrased below:

“Very pleased with my purchase.”

“Quick readings, never had to wait.”

“Its capabilities live up to the marketing claims.”

“Love the size, it’s so easy to handle.”